skip to main | skip to sidebar

There was a lot of tissue paper involved when presents were unwrapped this morning and most of it went onto the floor.
Don't anyone tell Mom but she was holding her cell phone at the wrong angle to get this video to play right. I hope you can enjoy it anyway because she threw all the paper away already.

Here are some more pictures of the paper games. They are of the three banes of my existence only because I refused to come out and play.

This is my new woofie Marco Polo. He is OK now that I am used to him. 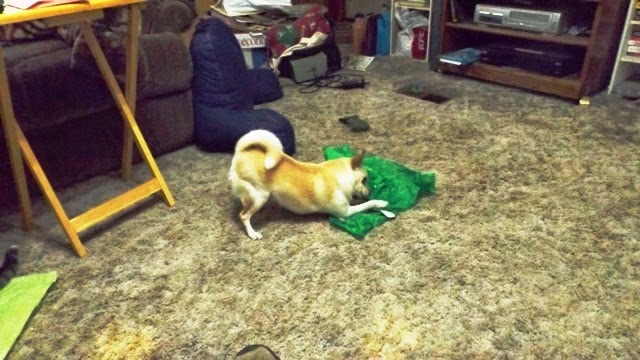 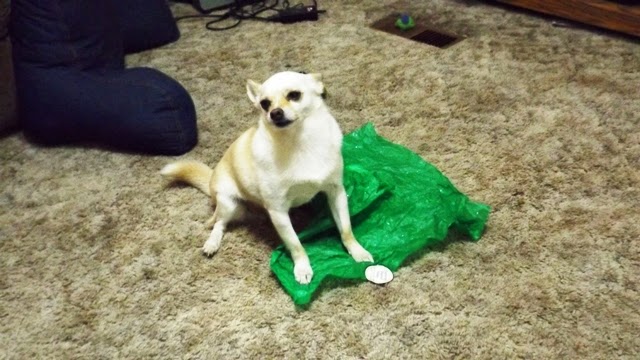 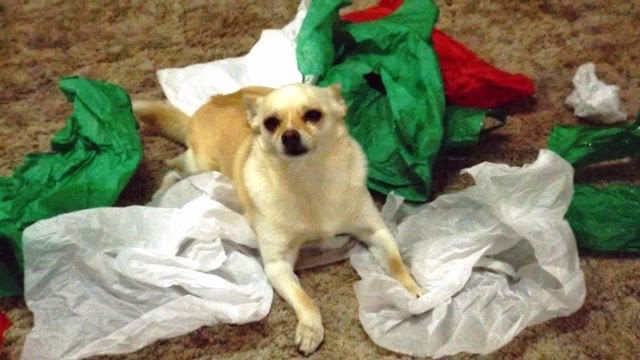 This is Rudyard Kitling. He is a serious pain. I have to thwap him a lot! 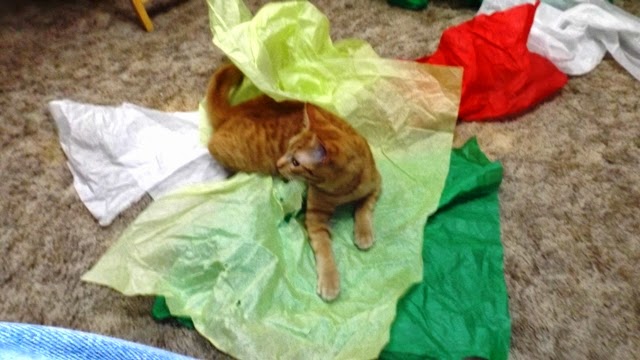 Marco and Rudy play together sometimes but this time Marco did not want Rudy to take any of his paper. 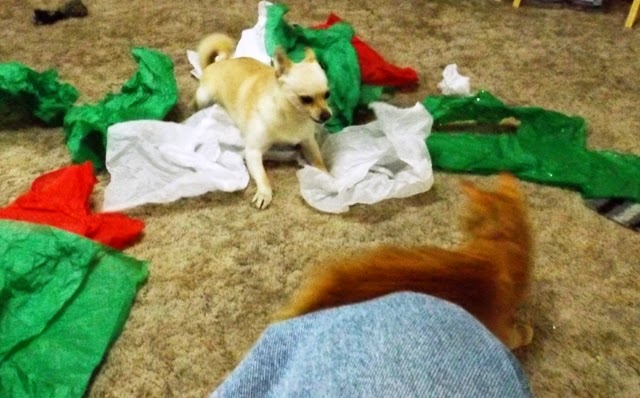 This one is Tiger Bomb. TBomb likes to sleep on Mom but sometimes her tortitude makes her act a little wild. She is even more of a pain than Rudy is and I have to thwap her way more than a lot. 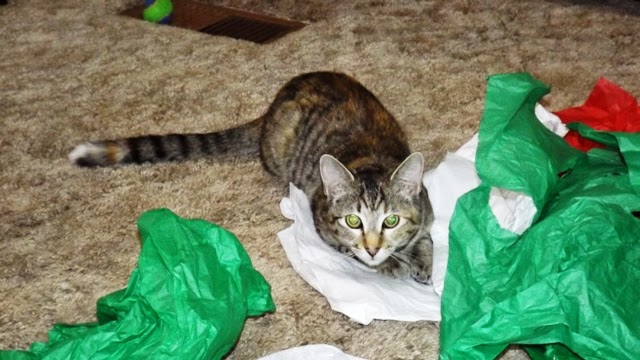 Rudy and TBomb played in the paper together for a long time. 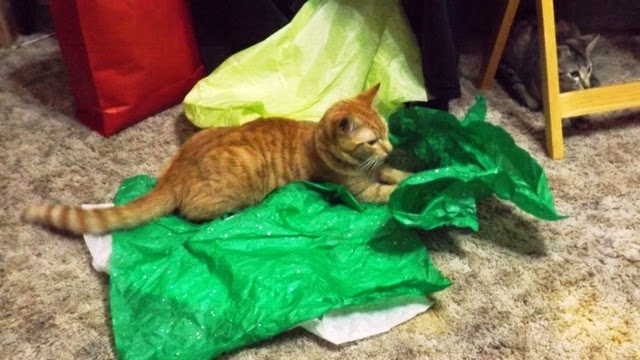 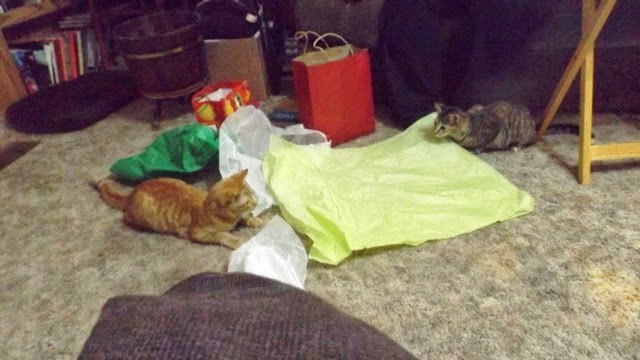 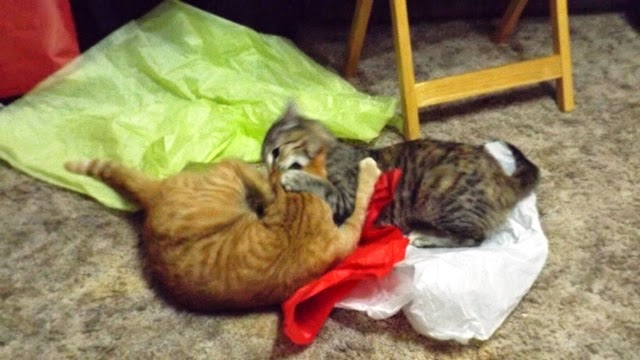 This is the only picture I have of all three at the same time. I would tell Marco I am sorry his head is cut off but I am not sorry so I will not lie about it. 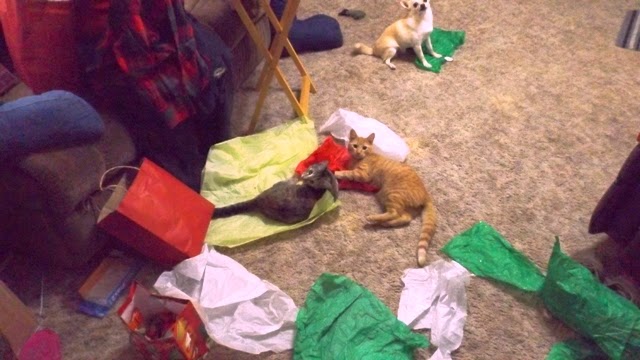 After all the presents were opened Mom and my Daddy went out for a little while. When they came home this is what Rudy and TBomb had done with the paper: 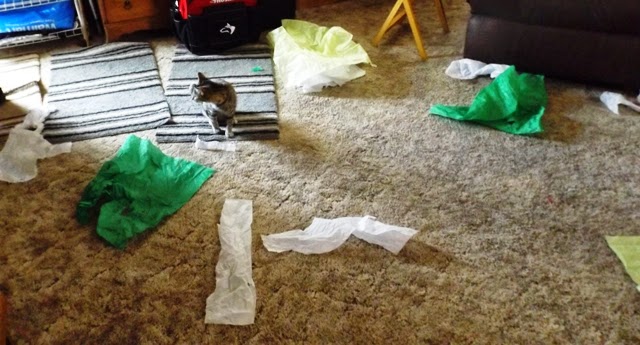 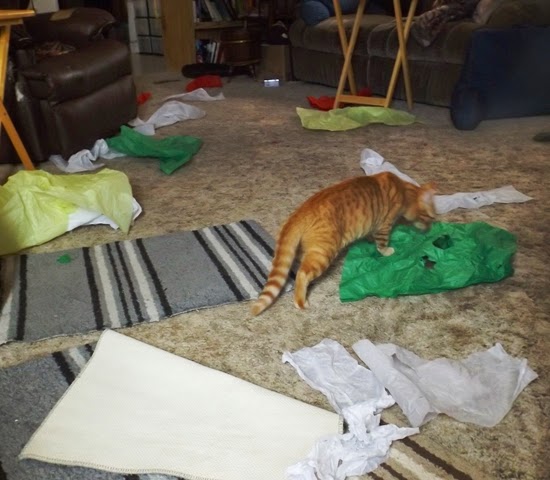 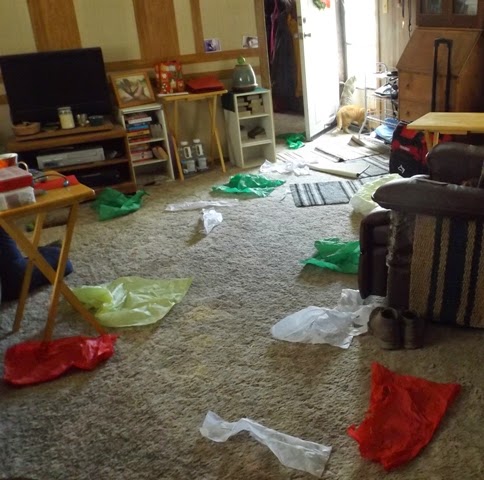 Mom and my Daddy were impressed with the paper trail. The paper went from the front door all the way to the kitchen and none of the same colors were next to each other.
After my Daddy took the pictures Mom picked up the paper and threw it away. I think she should have left at least one piece for me for when I decided I wanted to play. At least I had a good long nap today so I will be awake if I decide to dig some paper out of the trash can after everyone else is asleep.
We hope you had as good a day as we did!﻿
Posted by Tiger Lily at 6:20 PM 4 comments: 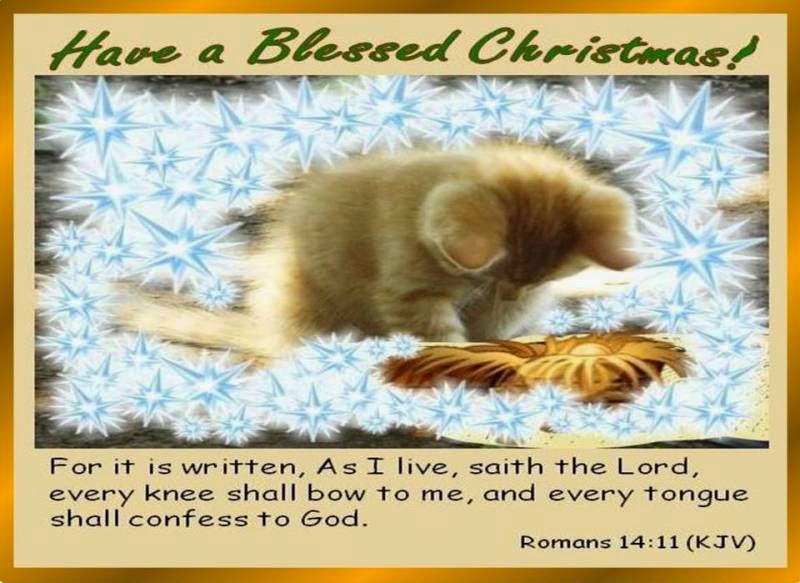 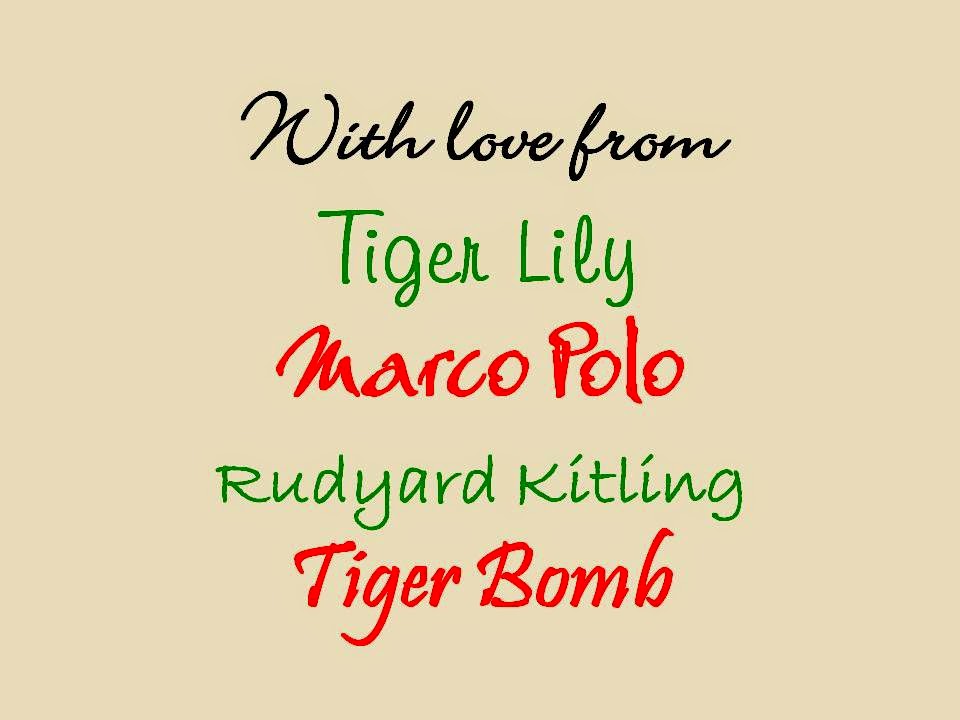 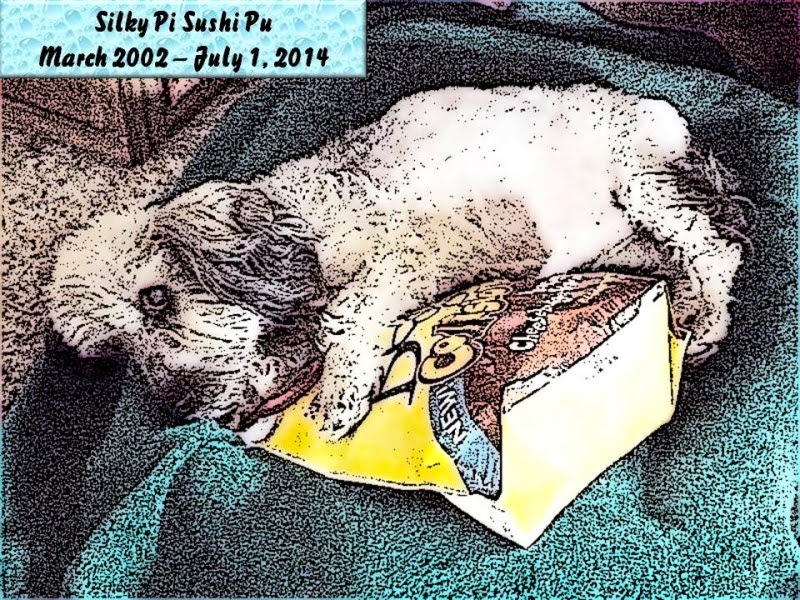 “Guard against the impostures of pretended patriotism.” 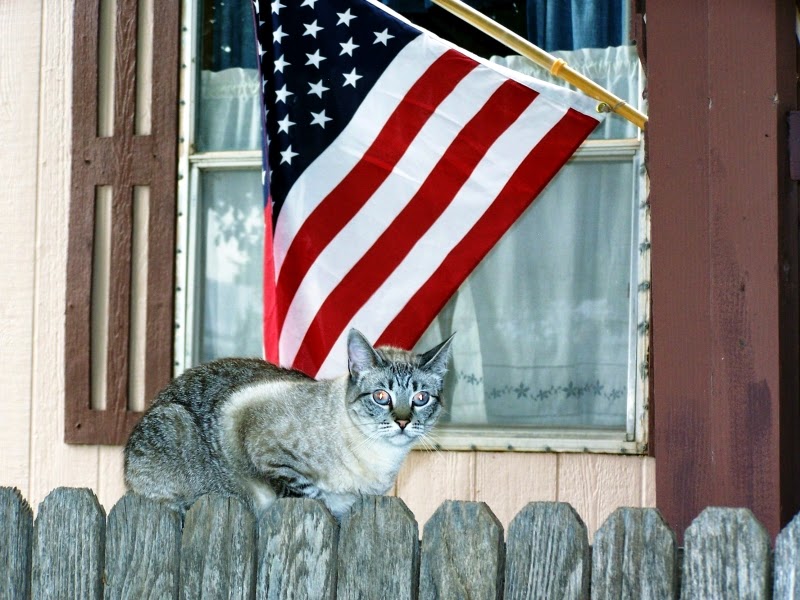 “It is foolish and wrong to mourn the men who died. Rather we should thank God that such men lived.” 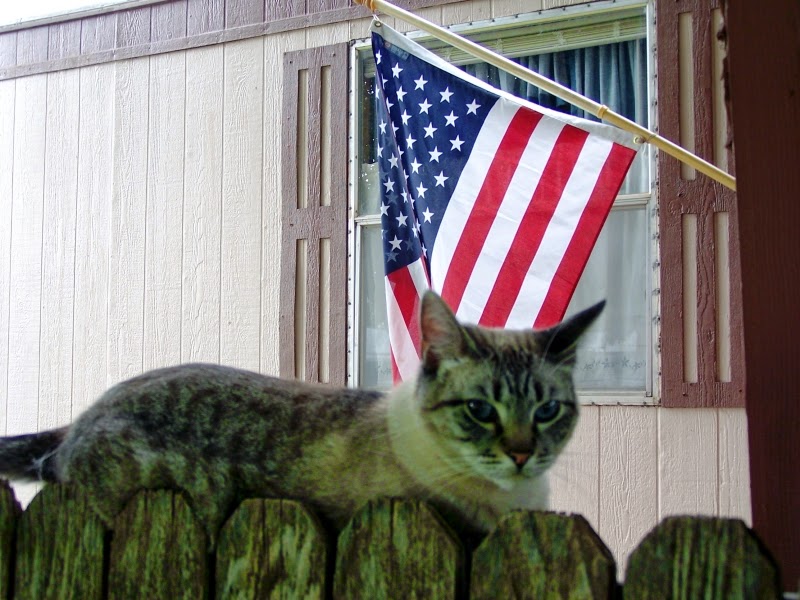 “Our debt to the heroic men and valiant women in the service of our country can never be repaid. They have earned our undying gratitude. America will never forget their sacrifices.” 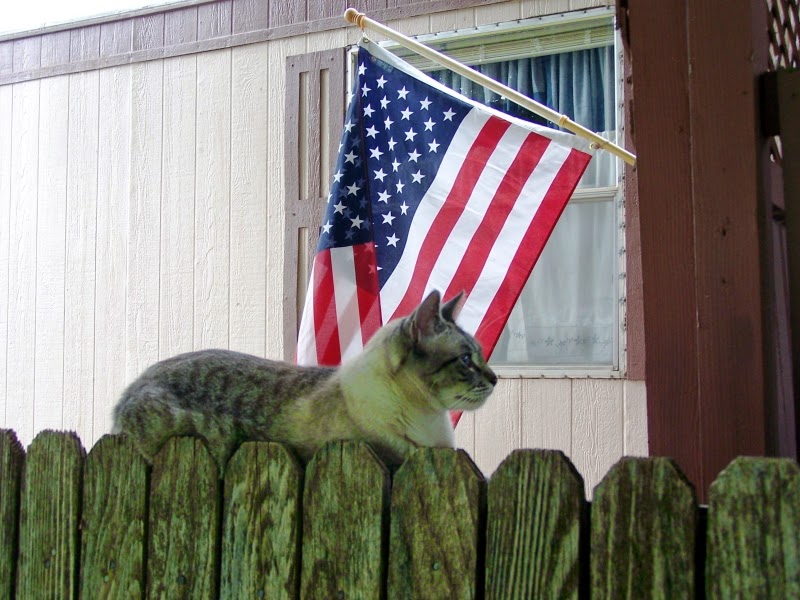 "A people that values its privileges above its principles soon loses both.” 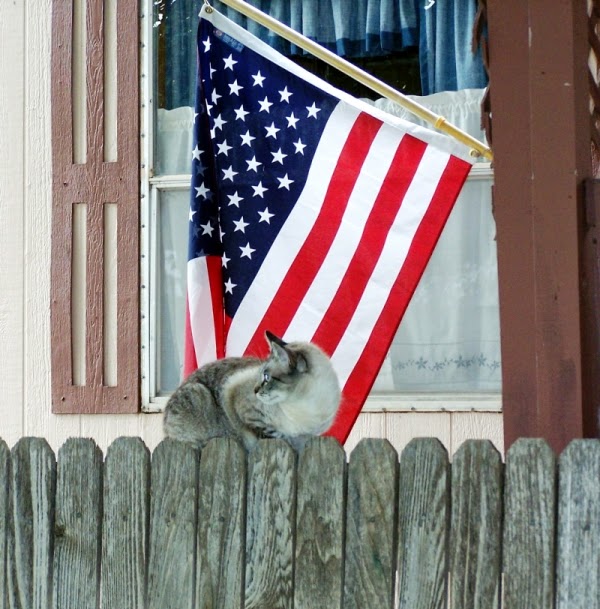 "Let every nation know, whether it wishes us well or ill, that we shall pay any price, bear any burden, meet any hardship, support any friend, oppose any foe to assure the survival and the success of liberty." 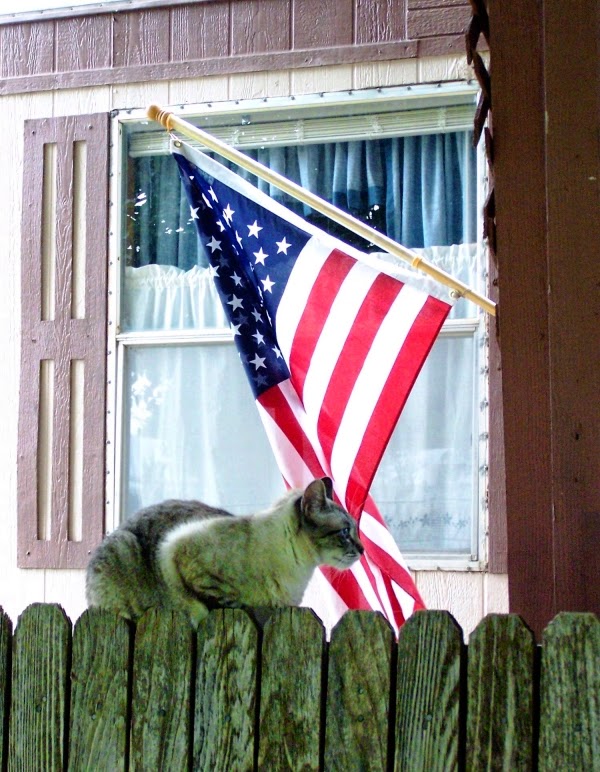 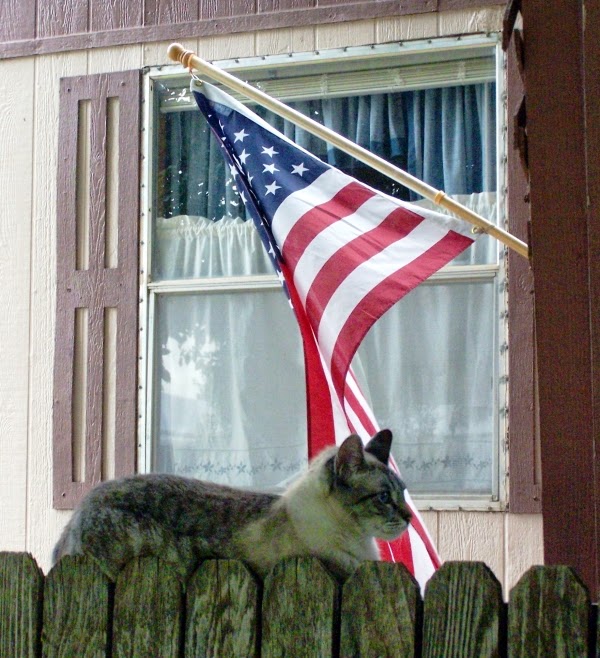 “I don't have to tell you how fragile this precious gift of freedom is. Every time we hear, watch, or read the news, we are reminded that liberty is a rare commodity in this world.”
– President Ronald Reagan

These words are just as important now as they were when they were first spoken. Today as we remember those brave men and women who are gone, let us also honor what they fought and died for - our freedom.
Posted by Tiger Lily at 9:41 AM 1 comment:

Even our cactus is celebrating our risen Savior: 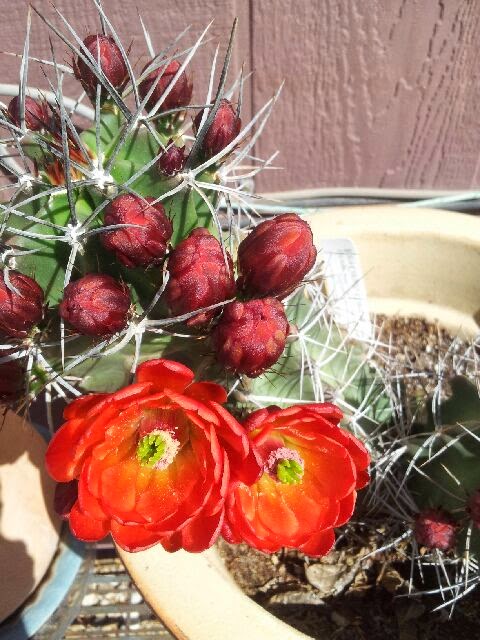 We have a really good reason to be happy this new year and we all say "Thank you Lord!" 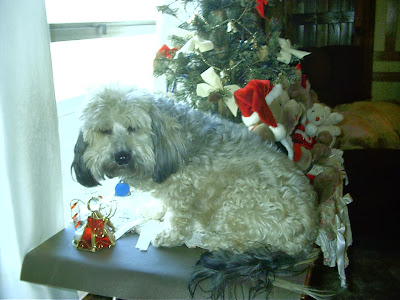 My woofie Sushi was very sick for about a squillion years and we were all very concerned about her. (Mom just told me it was more like 4 days but what does she know?) Anyway Sushi stopped eating anything and would not even sniff at her favorite treats. Then she could not jump up onto the couch or the bed. Then she started drinking a lot of water and then she started throwing up all over the house (Mom and my Daddy spent a lot of time cleaning up after her) and doing a lot of what Mom told me is called whimpering. Then she made a nest in the leaves in the back yard and would not come in the house even when it was very cold so Mom had to carry her in. Then Mom and my Daddy talked about how these were the same symptoms my woofie Zeke had before he had to leave us early last year and Mom had a very hard time to keep from crying.

So on Monday Sushi ate a little bit of my woofie Marco's breakfast and wagged her tail and followed Mom around the house a little bit before she took a long nap on her bed in the living room. On Tuesday she ate all of Marco's breakfast (she would not eat out of her own bowl so Marco ate Sushi's breakfast) and took a walk around the park with my Daddy. Then she ate most of her dinner out of her own bowl and even ate a treat. Then last night she was able to jump up on the couch and the bed all by herself.

And today Sushi is almost all the way back to being her old happy and active self. She even yodeled at our neighbor from our back yard!

So we all hope that your New Year has started as well as ours has! And we hope that you have a very wonderful 2014!
Posted by Tiger Lily at 8:39 PM 4 comments: 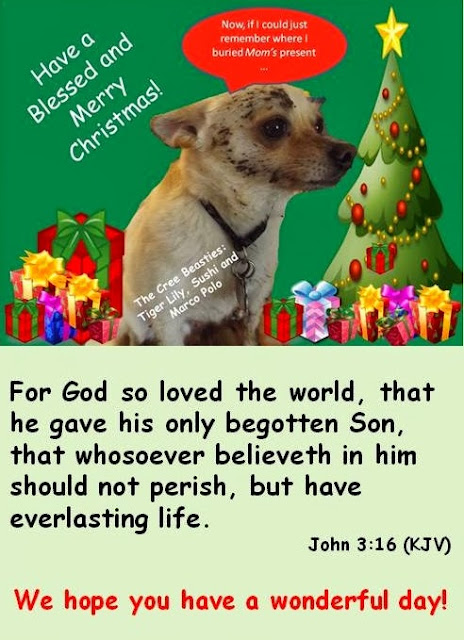 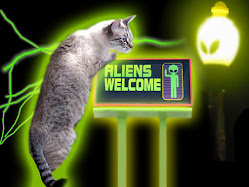 Thank you to Maggy, Zoey and all my friends at Zoolatry for this great graphic! 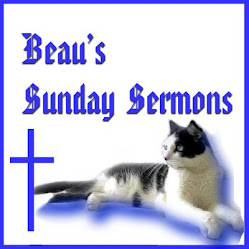 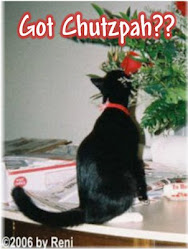 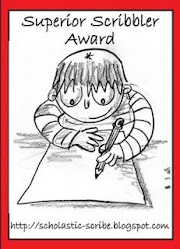 From Herman and Karen Jo 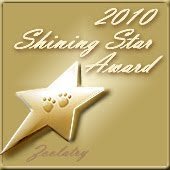